Members of this family of spiders (12-15mm long) are active hunters with good vision. The nursery-web spider hunts amongst low vegetation as well as on the ground. When detecting prey, they characteristically rest on vegetation with the first two pairs of legs together, held out at an angle. During courtship, the male nursery-web spider presents the female with a ‘nuptial gift’ in the form of an insect wrapped in silk. Until recently, this gift was thought to protect the male from becoming the female’s next meal. Research has shown, however, that the gift entices the female to mate, and what’s more, the size of the gift is related to how long the female will mate with a male. The larger the gift, the longer copulation will last so more eggs will be fertilized by more ‘generous’ males bringing larger gifts. Female spiders belonging to this family produce very large egg sacs, which they carry around beneath their body. When the time for the spiderlings to emerge approaches, the female deposits the egg sac on a leaf and spins a protective silk ‘nursery web’ around it. She then opens the egg sac slightly, and stands guard until the spiderlings emerge. These spiders are large, brown and hairy and are often confused with the Wolf Spider. Unlike the wolf spiders, which have two very prominent eyes in addition to the other six, the eyes of the nursery web spiders are more or less the same size. Many species are able to walk on the surface of still bodies of water, and may even dive beneath the surface for a time to escape enemies. These spiders are venomous & can bite but they are not dangerous. There bite is similar to an ant bite resulting in some very mild swelling for a few days. 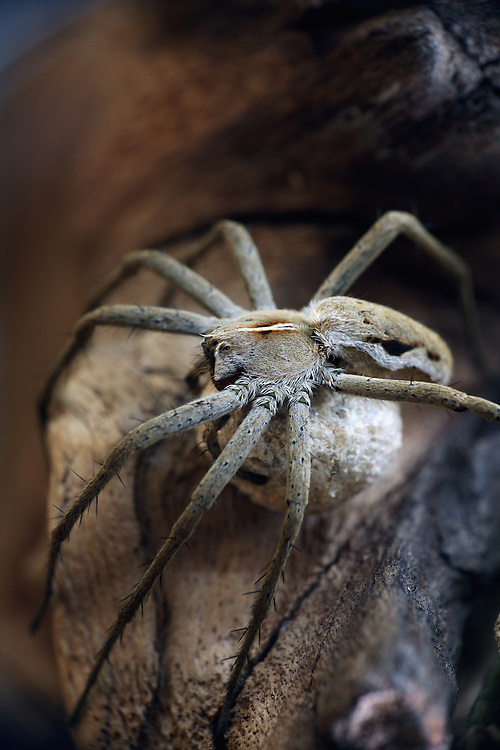